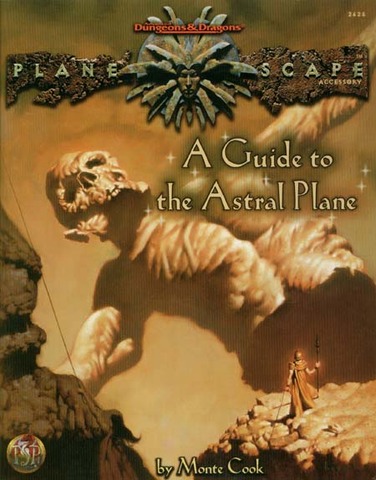 A Guide to the Astral Plane

"SO WHY DO THEY CALL IT THE SILVER VOID?
MUST MEAN THERE'S NOTHIN' THERE...RIGHT?

Most berks think the Astral Plane's an empty place, serving as nothing but a cosmic highway connecting all the other places in the multiverse. Canny planewalkers know differently, though. Here are just a few of the "secrets" of the Silver Void that this book explains:

It is the backdrop of the multiverse, where phenomena such as space and time are so vastly different from "normal" that only a true blood knows his way around.

When he's on the Astral Plane, a basher moves, fights, and acts solely with his mind.

It is the closest thing the multiverse has to a "plane of magic," where sorcery and spells are not only more powerful, but are palpable, tangible objects.

The primary inhabitants are the infamous githyanki, an ancient race of wizards and warriors who know the dark of many secrets forbidden to others.

The Astral Plane is literally the dead-book of the gods.