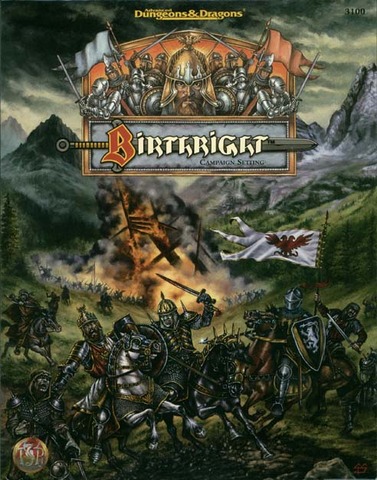 A king stands in the high turret of his castle, squinting at the distant hills. He can just make out the figures of his troops engaging the enemy in battle. As a damp breeze whips at his cloak, he comtemplates the war. He has culled the best generals, captains, and troops from his land. His court wizard wields powers that unnerve even the most seasoned warriors. Can the forces he commands hold the enemy at bay? Or will the king awake at dawn to the pounding of battering rams and showers of deadly arrows?

From the tower, the battle is impossible to judge. The ruler twists the royal signet ring on his finger nervously. Then, a ragged messenger races up the stair behind him, clutching a stained parchment. "Word from the general, your majesty," he pants. The king takes the message in trembling fingers and slowly reads....

Experience the thrill of playing rulers of legend who command mighty armies and wield the power of kingdoms! The BIRTHRIGHT campaign setting for the AD&D game makes this possible as never before. Role-play warriors, wizards, priests, and thieves descended from royal bloodlines, command imperial powers, and control the destinies of far-reaching lands. But be prepared to battle enemies who are equally powerful, as well as millennia-old monstrous abominations that will stop at nothing to steal your kingly power.

Are you up to the challenge of deciding the fate of a continent?
The crown and scepter can be yours!

Inside this box, all in full color, you'll find:

The Atlas of Cerilia: 32 pages detailing the history and features of the continent.

The BIRTHRIGHT Rulebook: 96 pages of information on royal-blooded characters, governing kingdoms, and the Cerilian pantheon.

The Ruins of Empire book: 96 pages describing kingdoms waiting to be conquered.
Two poster maps illustrating the lands of Cerilia.

A Battle Mat and 112 War Cards for resolving all types of military clashes, plus a custom-built War Chest for storing the cards.